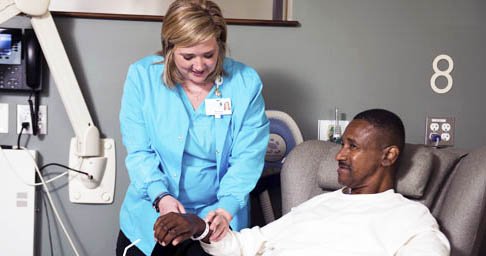 The urethra is an important part of the urinary tract. While it’s primary job in both genders is to pass urine outside the body, this channel also has an important role in ejaculating semen from the reproductive tract of men. Most people will not have any, problems with the urethra. But a few of us may experience the discomfort and dysfunction associated with benign urethral lesions. What are they and can they be treated? The information below should help you talk with your urologist.

What happens under normal conditions?

The urethra is a tube-like organ whose function is to transport urine from the bladder out of the body. In males, the urethra begins at the bladder and extends through the prostate gland, perineum and the entire length of the penis. In females, the urethra is much shorter and extends from the bladder to just in front of the vagina and opens outside the body. Normally, urine flow is painless and can be controlled, the stream is strong and the urine is clear with no visible blood.

What are some causes of benign urethral lesions?

What are some types of benign urethral lesions?

Non-cancerous growths: Linked to the presence of genital warts on the penile shaft, these lesions are often the product of the human papilloma virus (HPV). Urethral wart-like growths are suspected when there is a visible lesion on the opening of the urethra or changes in the urinary stream, accompanied by a history of genital warts. There may also be blood in the urine and pain or burning with urination.

Lichen Sclerosis (LS) or Balanitis xerotica obliterans (BXO): Lichen Sclerosis is a chronic skin condition with unknown causes that affects the end of the penis. This is marked by pale, shiny, whitish skin around the opening of the urethra that turns over time into scar. This process is thought to begin in early and progress throughout adulthood, leading to a narrowing of the urethra (urethral stricture) and difficulty passing urine. Other symptoms include soreness, itching and cracking of the skin sometimes resulting in ulcerations and bleeding.

Urethral stricture disease: Urethral strictures result from scar tissue formation at one or more points in the urethra. This disease process is completely described in the Urethral Stricture section on this website. The symptoms of urethral stricture disease include decreased urine flow rate, frequent urination, urinary tract infections, bleeding and inflammation/infection of the prostate. Diagnosis is usually made by urinalysis, retrograde urethrogram and cystoscopy. 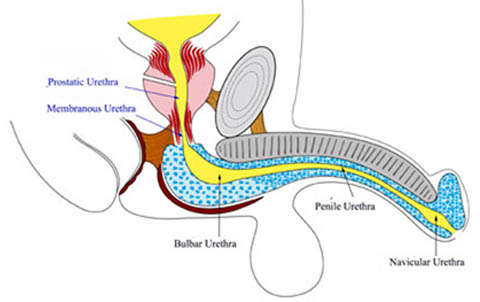 Urethral polyps: A urethral polyp is an uncommon, irregular growth that usually arises at birth. It is most common in females and is usually composed of fibrous tissue but may include some smooth muscle, small cysts or nerve tissue all covered by a thin protective layer of tissue. Symptoms include a lump in the vulva of the vagina, blood in the urine or a blockage of the urinary stream. Urethral polyps are diagnosed with cystoscopy, a procedure that allows a urologist to readily view the polyp, and a voiding cystourethrogram (VCUG).

Paraurethral cyst: Also known as Skene’s glands, paraurethral glands are located in the urethrovaginal wall at the opening into the urethra in females. A paraurethral cyst appears as a glistening, tense and bulging yellowish-white mass reducing the size of the urethral opening. Common symptoms include a misdirected urinary stream, urinary blockage and painful urination.

Urethral caruncle: Urethral caruncles are polypoid (or stalk-like) masses, hanging from one area of the urethral opening. These are usually spotted during an examination for another condition. They are relatively common in women who do not use hormone replacement therapy (HRT) after menopause. Symptoms can include bleeding and pain with urination, frequency, urgency and tenderness around the opening of the urethra. The primary sign of this problem is a thin, reddish membrane protruding from one portion of the urethral opening.

Urethral prolapse: A rare and more bothersome abnormality of the female urethra than other benign lesions is called urethral prolapse. This occurs most commonly in young girls though it also may surface at any age. It is marked by the urethra’s membrane and underlying spongy tissue protruding out of the opening of the urethra. This leads to pain, vaginal bleeding and occasionally urine retention. A diagnosis is usually made by simple physical examination.

How are benign lesions treated?

The nature and location of any benign lesion will influence how it is treated. Abscesses, urethral injuries and infections require immediate attention. A urologist has a variety of medications and procedures to deal with these lesions.

Abscesses linked to gonococcal urethritis can be treated successfully today with antibiotics. Additionally, your urologist may need to surgically drain the abscess and divert the urine flow with a catheter in the bladder (Foley catheter) or draining the bladder through the abdomen (suprapubic tube) until your condition improves and you can urinate normally.

Treating urethral stricture disease is based on the accurate delineation of individual scars. The cornerstone of this process is urethrography, an imaging technique that utilizes retrograde instillation of a contrast dye into the urethra to determine the length and location of the strictures. If these strictures are very dense or if they completely destroy the channel, a more detailed urination study through an incision above the pubic bone may be necessary.

Urethral strictures are often treated by increasing the diameter of the channel either through dilation or endoscopic incision. Techniques such as direct vision internal urethrotomy (DVIU), are very successful for short strictures (less than two centimeters). Dilation performed under local anesthetic jelly utilizes a series of increasingly large tubes or dilators that are passed from the urethral opening into the bladder. The insertion of the dilators may be conducted under the guide of a urethroscope. Dilation produces some discomfort, usually made worse by tighter, dense strictures. The urologist may place a urethral catheter into the urethra 24 hours or longer after to drain the bladder. 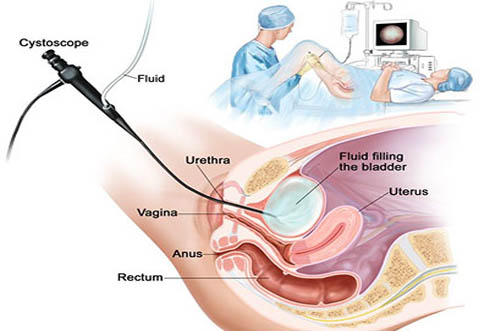 DVIU is also carried out under general anesthesia, although some urologists elect to perform it with a local anesthetic in the office. In either case, with the aid of a cystoscope, the surgeon makes a deep incision through the stricture with a small endoscopic knife. By making a single cut through the scarred stricture, the doctor exposes healthy epithelial tissue beneath, which should allow the urethra to re-cover itself. Long strictures, as well as any scars in the pendulous urethra, respond less well to DVIU or dilation. Instead, those scars, along with completely destroyed urethras, can be dealt with by surgical reconstruction, which has varying results.

A surgical procedure called urethroplasty is performed by making an incision in the penis and then removing the stricture and rejoining the tissue at the ends of the urethra or inserting a skin graft to partially or completely restore the urethra at the stricture. A catheter usually is needed for several weeks after this procedure.

Permanent, implantable metal stents have been employed for bulbar urethral strictures. But while initial clinical trials have yielded promising results in men exhibiting shorter scars (two centimeters or less) with some co-factors, the stent’s application is limited.

Treating non-cancerous urethral growths can be difficult. The lesions associated with genital warts (from Human Papilloma Virus) can be treated with lasers to destroy the visible lesions connected to this condition. Some physicians advocate topical cream treatments. But as of now, no technique reliably eliminates the condition or prevents the virus from recurring in the future.

Treatment for urethral polyps consists of removing the polyp using cystourethroscopy, a minimally-invasive technique that allows the urologist to peer into the urethra and, with additional miniaturized instruments, remove the growth.

In the case of paraurethral cysts, no treatment is necessary if there are no symptoms since they usually spontaneously rupture and decompress. If, however, a blockage, infection or pain develops, the urologist may pierce the cyst with a scalpel blade to drain it and relieve the symptoms.

For patients with a urethral caruncle but no symptoms, no treatment is needed. Some advocate topical estrogen cream or hormone replacement therapy (HRT) to resolve the caruncle. If the caruncle is large or causes problems, the urologist may remove the growth and cauterize the base.

Treatment for a urethral prolapse consists of surgically removing the prolapsed tissue and repositioning the membrane using stitches to prevent further protrusions.

What can be expected after treatment for benign urethral lesions?

Benign lesions associated with human papilloma virus (HPV) and gonorrhea are notoriously difficult to address, even though antibiotics are effective in controlling the problem. So it is not uncommon to repeat treatment because such urethral lesions recur.

The main complications associated with both dilation and internal urethrotomy for the treatment of urethral strictures include high rates of stricture recurrence. This depends on the length of the stricture, with shorter ones usually doing better with these therapies than longer ones. Several studies have suggested that daily, intermittent catheterization up to three months after the procedure may reduce recurrence.

Complications associated with urethroplasty include recurrent stricture disease, bleeding, infection and lower extremity complications due to patient positioning. Prior to removal of the catheter after surgery, your doctor will probably order a voiding cystourethrogram, a contrast imaging study of the urethra, to determine if the area is healing properly.

Doctors usually follow any stricture procedure with repeat clinic visits, physical examination and questioning to monitor the force of the urine stream from the urethra. In addition, repeat radiographic studies (retrograde urethrograms) are commonly performed at three and 12-month intervals after a urethroplasty to monitor any recurrence. While most strictures develop within a year of surgery, they have been known to show up 10 years later.

Mosquitoes Bites: In a place, where 3-4 people are standing together and there are mosquitoes too, then how does it…

Scared that doomsday will soon be upon you? Worry that the mild gastric indigestion may really be sign of an…

Before birth, there is a connection between the bellybutton and the bladder. This connection, called the urachus, normally disappears before…

One thought on “Benign Urethral Lesions, Causes, Symptoms, Types and Treatment in India”