People who have had diabetes for a while know what will cause a spike in their blood sugar and what to do to cause it to go lower almost immediately.

If you have recently been diagnosed with diabetes, you might panic when you see a high number. The best thing to do is not to panic. Stressful situations can release hormones that will cause your blood sugar to rise even higher. If you are feeling anxious, drink a cup of chamomile tea, take a walk, relax and breathe deeply. 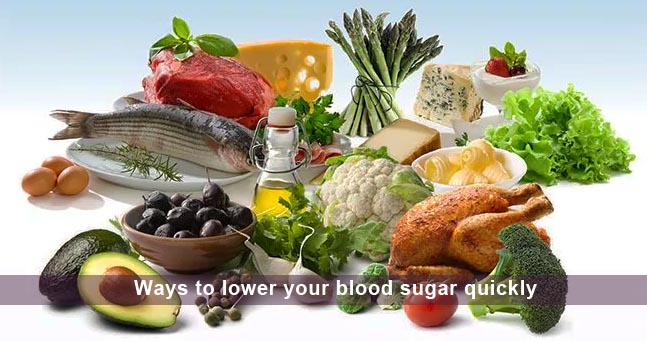 Think back to figure out what you ate to cause your blood sugar to go higher. Once you discover the culprit, try to avoid that food or that amount of food in the future.

According to an article “How to Lower Your Blood Sugar Fast,” two options are given:

Use up the glucose in your bloodstream with physical movement by jogging, riding a stationary bicycle or doing some calisthenics such as jumping jacks. Swing your arms in circular movements. Keep up the activity for at least 10 minutes or more.

Drink two 8-ounce glasses of water quickly. Wait five minutes and drink a third glass which will cause you to urinate. Water dilutes the blood and flushes out the sugar from your bloodstream.
Here are some foods and drinks that will lower your blood sugar quickly:

Eat 2 tablespoons of peanut butter. If you don’t want to eat it alone, put it on apple slices. Do not put it on crackers or bread for they are carbohydrates and counterproductive to lowering your blood sugar. This writer ate peanut butter, and it quickly lowered her blood sugar level by at least 40 points.

An article suggests that drinking one cup of green tea often lowers blood sugar levels as much as 30 points. Regular black tea is also effective, and white tea helps, too. Green tea supplements also have a positive effect on blood sugar levels.

Cinnamon has been known to reduce blood sugar levels. Sprinkle a couple teaspoons of cinnamon powder on yogurt, or take it in capsule form. This doesn’t work with a huge cinnamon roll.

According to Diabetes In Control, 2 tablespoons of vinegar before a meal even as part of a vinaigrette salad dressing will dramatically reduce the spike in blood concentrations of insulin and glucose.

Eating a 1/2 cup of almonds or pecans can lower a diabetic’s blood sugar level.

Blueberries: Good food to eat if you are a diabetic

According to America Now, a new study shows that blueberries can guard against all kinds of diseases.

Researchers made blueberries smoothies and pre-diabetes patients who drank two smoothies per day were 24% less likely to go on to full blown diabetes.

Blueberries always seem to be available at the local grocery stores. They are priced so they are affordable and are often on sale.

You can eat blue as they are or you can put them in smoothies and other foods. Believe it or not there is a blue juice, blueberries bagel, blueberry syrup and of course blueberry pancakes.

If you are diabetes like so many other Americans, put blueberries on your grocery list. Not only are they good, but they are also good for you.

Most of us like vinegar on certain dishes for the flavor it adds to the food. Vinegar is good on cucumbers, tomatoes, and salads. However, some of us are not aware of the many benefits vinegar provides our bodies.

Apple cider vinegar is a good home remedy for many things that ail us.

Vinegar is a cure for the following ailments:

According to an article on Hubpages.com, “Bragg Organic Apple Cider Vinegar Gives You Amazing Energy.”

IMPOTENCY When you aren’t one up!

Nikesh Sharma5 years ago3 years ago 0