HEAL WITH HOMEOPATHY – A combination of factors can cause sexual difficulties

Sexual dysfunction refers to difficulty during stages of the sexual act (which includes desire, arousal, orgasm, and resolution). This in turn, prevents the individual or couple from engaging in sexual activity.

Sexual complaints among men include loss of erection, early ejaculation, absence of pleasure and others. About five crore Indian men are estimated to have erectile dysfunction. Among women, sexual dysfunction is an agerelated, progressive and a highly prevalent problem. Most common complaints in women include dyspareunia (painful sex), fear of sex, vaginal dryness, painful spasms of the vagina, loss of desire and absence of pleasure.
Causes of sexual difficulties can be both physical and psychological or a combination of both. Psychological problems include depression, sexual fears, guilt or past sexual trauma. And, sometimes, emotional factors like interpersonal problems such as marital discord or lack of trust and communication between partners also trigger sexual problems.
Physical factors include intake of drugs (alcohol, nicotine, narcotics, stimulants, antihypertensives, antihistamines), enlarged prostate gland, problems with blood supply, nerve damage, disease (diabetic neuropathy, multiple sclerosis, tumors), failure of various organ systems (heart and lungs), endocrine disorders (thyroid, pituitary or adrenal gland problems), hormonal deficiencies (low testosterone, estrogen, or androgens ) and some birth defects.
As a mind and body science, homeopathy has proven extremely effective for sexual complaints in both men and women. It’s an answer for both physical complaints as well as associated psychological issues. The treatment is pleasant, non-invasive and non-addictive. The results are safe, sure and long lasting.
A 35-year-old man with diabetes visited Dr. Batra’s Positive Health Clinic at Kolkata with a complaint of erectile dysfunction and loss of sexual drive. He had a dominating wife who would make him feel guilty about the problem. His physical problem and the resultant marital conflict drove him to depression where he could no longer concentrate on his business. The couple had been married for several years and don’t have any children. A semen analysis revealed that he had oligospermia (decreased sperm count). We prescribed homeopathic remedy Natrum Mur 200. After two years of treatment his wife conceived and gave birth to twin children. The man recovered his confidence and came out of his depression.

Sepia 200 – Indicated in menopausal females who have developed an aversion to sex due to painful condition caused by dryness of the vagina.
Lycopodium 200 is prescribed for old men suffering from impotency and experience strong desire but have imperfect erections. This has proved effective in cases of premature emissions and impotence caused by an enlarged prostate. 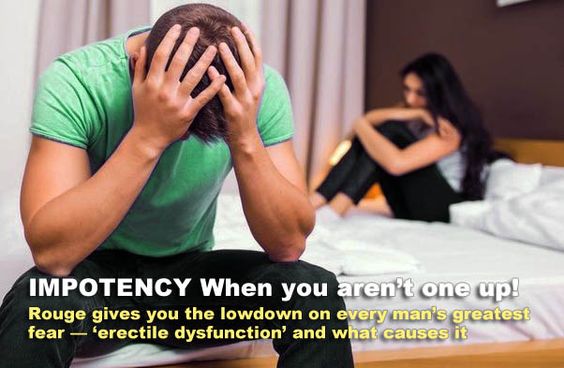 There is a time in a man’s life when his self- esteem is most vulnerable, and he is coping with…

44% of Diabetics Suffer Sexual Problems: Study Increased blood sugar levels can pose a big problem for a couple in…