India has been described by columnist Martin Wolf as a premature superpower: one of the world’s largest economies, but a country with a low per capita income. In countries with low per capita income, public health expenditure has to be primarily focused on preventive healthcare, especially protection from communicable diseases. Curative care has to be largely financed from private sources. But what is the best way to do that, and how do we provide healthcare to those too poor to pay for themselves?

Health insurance is the most effective way of privately financing healthcare. However, global experience shows that private health insurance systems work in countries with per capita incomes of at least Rs 4.5 to Rs 5 lakh. Clearly, with a per capita income of only around Rs 50,000, India still has a long way to go. But there are large variations around this average and those in higher income groups can well afford to insure themselves while those at the lower end cannot. From the perspective of health insurance, three broad groups are identifiable.

For those in the lowest income groups, the government has launched a bold experiment under an insurance scheme called the Rashtriya Swasthya Bima Yojana (RSBY). Under this scheme which started in 2007, ‘below poverty line’ or BPL families are given an entitlement of up to Rs 30,000 per family per year to cover treatment costs. The insurance premium is paid by the central and state governments in the ratio of 75:25 (higher for some special category states).

To minimise leakage, the scheme has introduced cashless transfers through smart cards. It is still early days. So far, 26 states are participating in the programme, of which 22 have started issuing smart cards. About one crore cards have been issued so far. Bihar, rapidly moving from near-‘failed state’ status to almost a star performer in governance, has just extended the scheme’s coverage from eight to 30 districts in
partnership with four major private insurance agencies through competitive bidding. Rs 30,000 cannot cover the treatment cost of catastrophic illness, but it is not chicken feed in a country where average income is only Rs 50,000 and where BPL families cannot afford any healthcare at all.

Since states typically inflate their BPL lists well beyond those identified as BPL by the central authorities, RSBY could eventually cover over 400 million people. If properly implemented, alongside the National Rural Health Mission, it could prove to be as much of a political game changer as NREGA, and set an example for the rest of the developing world.

There is a Distortion in the market for private Health Insurance.. it is interesting to ask why no insurer has yet offered a proper insurance product to beat the competition. is tere a cartel at work.

If RSBY provides minimal insurance cover for a large number of beneficiaries, at the other end of the spectrum we have maximum healthcare cover at a nominal premium for a relatively small group of beneficiaries – government employees, including retirees, and their families – under the Central Government Health Scheme (CGHS). Though the number of beneficiaries is large in absolute terms, it is still a small fraction of the country’s population. Though probably the best among the three broad systems of health insurance found in the country, CGHS still needs major reform.

Though coverage is virtually unlimited in theory, including treatment abroad, what actually gets covered is still subject to discretionary approval by the concerned authorities. That needs to change. The premiums are nominal and need to be enhanced, along with a ‘deductible’ share payable by the beneficiary, subject to a ceiling, to make the system financially viable. Moreover, private hospitals are increasingly reluctant to treat under CGHS coverage. They complain that getting paid is a nightmare. Nevertheless, for the beneficiaries this is on the whole a good insurance scheme.

Between RSBY beneficiaries at the bottom and CGHS beneficiaries at the other end, we have the rest of the population, close to half a billion people, left to their own devices. Those employed in the corporate sector, just a few million people, usually get medical care cover as part of their benefits. Those in high income groups, again just a few million, buy their own insurance from private insurance agencies. The rest pay what they can afford for doctors, medicines and private hospital care, or they queue up in public hospitals. 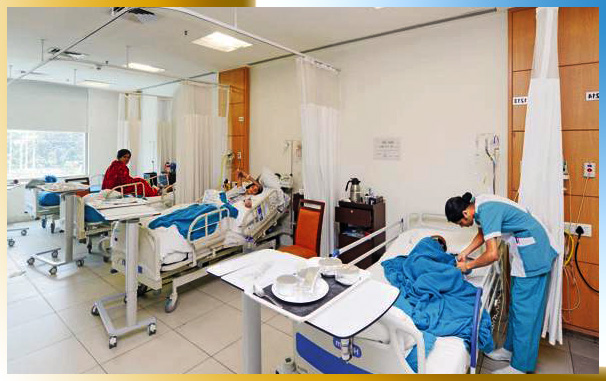 The challenge is to find a viable health insurance model for them, based on low margins and high volume. There is a peculiar distortion here in the market for private health insurance that needs to be addressed. Health insurance is bought not for treating a flu or sprained ankle but as protection against the huge expenses of treatment for a catastrophic illness or accident.

Elsewhere in the world, a good insurance policy provides unlimited cover for such illness, with a ‘stop loss’ limit beyond which there is no ‘deductible’ payable by the policy-holder. In India, it is the reverse. The ‘stop loss’ limit is a cap beyond which the insurer provides no cover! It is interesting to ask why no private insurer has yet offered a proper health insurance product to beat the competition. Is there perhaps a cartel at work?