Research, new technological advances, an improvement in lifestyle and more…have changed the quality of our lives and health. Dr Vasundhara Atre details these trends

“The glory of medicine is that it is constantly moving forward, that there is always more to learn.”
— William J Mayo

MEDICINE has made revolutionary advances.The average person’s life expectancy has increased by almost 30 years. Heart disease, cancer, stroke, and other conditions often associated with ageing have replaced infectious diseases as the leading causes of death. Here’s more on how technology has improved our health and changed our lives. 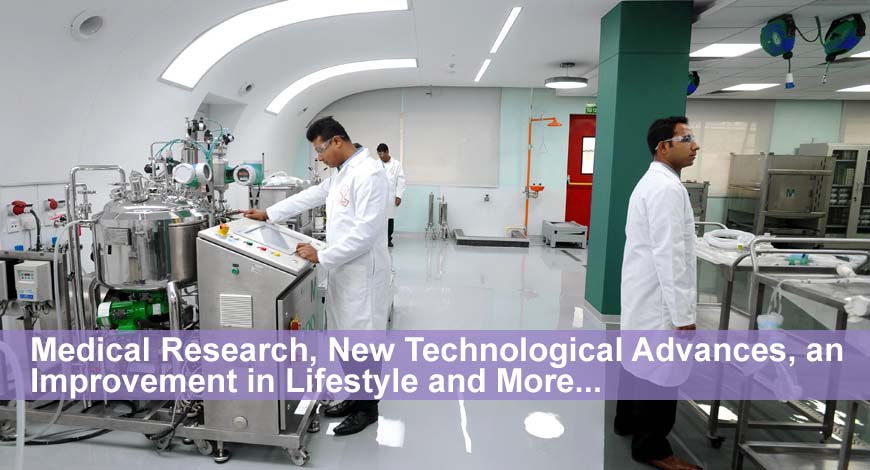 Technology’s promises: By the end of the 20th century, the medical focus has been on preventing disease, early, accurate diagnosis and advanced treatment modalities, while bio-medical research has concentrated on the basic causes of diseases including genetic defects in individuals.

Infectious diseases: Infectious diseases historically have killed millions of people. Improved sanitation, antibiotics, and vaccines have helped control their onslaught. New forms of diseases resistant to antibiotics, new or newly recognised microbes, such as Human Immunodeficiency Virus (HIV), the cause of Acquired Immunodeficiency Syndrome (AIDS), have surfaced. Peptic ulcer once blamed on stress and diet has been recognised to be an easily curable bacterial infection.

Cancer: Early detection and better treatment have resulted in major improvements in survival of cancer patients. Screening tests have been developed for some cancer genes that are associated with an increased risk of the disease. Gene chips had been used to accurately tell the difference between several closely related types of childhood cancer. Advances in gene therapy also offer promise for new cancer treatments. New drugs, surgical procedures and ways of treating cancer with X rays, radioactive isotope radiation and immunotherapy have been developed.

Nutrition: The roles of vitamins, antioxidants, mineral supplementation for optimal health have also been underlined. Problems of undernutrition, obesity, bulimia and anorexia have emerged as the latest challenges.The beneficial value of various herbs, spices and plantbased medicine is being revisited. Dietician and nutritionist, Gayatri Barve explains,”Phytotherapy is the science of using plant based medicines to treat illness. Phytomedicines are therapeutic agents derived from plants, parts of plants, or the preparations made from them. For many botanical medicines, the active ingredients and the mode of action have been defined. Commonly used phytomedicines are echinacea, garlic, ginger, ginko, ginseng, aloe, psyllium, soya derivatives like genistein and green tea.

Pregnancy and Childbirth: Dr Sudha Sheth, senior gynaecologist, and president, Association of Medical Consultants, Mumbai, elaborates,“Most of the gynaec surgery can now be done endoscopically including oncosurgery. Advances in fertility management have made it possible for a man to father a child with severe oligospermia, maybe just one sperm! Womb donation, egg donation and embryo freezing for future use have made it possible for every woman to achieve motherhood. Recent researches have made it possible to add ‘glue’ to the fertilised embryo making it more certain to get it stuck to the uterus when implanted resulting in continuing pregnancy.Till now failures in artificial reproductive technology are often due to failure of implantation.

Animal experiments have reached a point where a sheep foetus is grown in the medium outside uterus to an advanced stage of pregnancy.This may in future negate the need of female uterus! If cloning becomes an acceptable method then man also may not be required for reproduction!”

Great advances have been made in birth control. Long-lasting hormonal implants and contraceptive injections give women more control in deciding when to become pregnant.

It is now possible to diagnose some congenital or inherited diseases before childbirth. Samples of placental cells or of the amniotic fluid around the foetus help to detect hereditary blood diseases, Down syndrome, defects of the spine, or other congenital diseases. Even the sex of a foetus may be known in advance. Surgery, to repair defects in unborn infants, while in the womb is now a reality.

Genetics and biotechnology:Gene research and identification of their role in heredity and disease was a landmark in medical advances. Indian-born American biochemist Har Gobind Khorana was the first to synthesise a gene in the laboratory in 1970. Genes associated with cancer; heart disease, mental illness, and obesity were identified. Gene therapy emerged as an experimental medical field that used genetically modified genes to treat diseases like cancer. In 2003 scientists completed – A Map of All Our Genes – the sequence of the human genome, in which they identified all the genes needed to make a human being!

Genetic engineering techniques were applied to the diagnosis and treatment of diseases. It enabled production of scarce human hormones and other materials for use as drugs. A new biotechnology industry started producing these materials for medical use. Scientists also began genetically modifying sheep and other animals to produce drugs in their milk.

Lasers in medicine: During the last two decades, lasers have penetrated into most of the fields of medicine and in many cases have revolutionised the modality of diagnosis and treatment. Applications of lasers in medicine are therapeutic (from cell surgery to vision correction and cosmetic surgery), diagnostic (from detection of neural cell activity to diagnosis of cancer), and imaging (from single molecules to optical tomography).

Implants: Today, medicine has made available various implant devices in all specialties of medicine.While they come a close second to nature, they help individuals overcome certain handicaps. Available are the cochlear implant, which infants as young as six months are receiving, dental implants, Artificial Urinary Sphincter Surgery, pacemaker implants which are benefiting many cardiac patients, Intacs – thin transparent rings, which can be implanted into the cornea as treatment for those who are nearsighted and various orthopaedic implants – which are helping many improve the quality of their lifes.

A penile prosthesis is another treatment option for men with erectile dysfunction. These devices are either malleable (bendable) or inflatable. The simplest type of prosthesis consists of a pair of malleable rods surgically implanted within the erection chambers of the penis.

Surgery: Operations, once regarded as impossible have become routine.These surgical advances have resulted from improved drugs and medical technology. Drugs to prevent rejection of transplanted organs have made transplantation of hearts, kidneys, Prostate Cancer, livers, lungs, Urethroplasty Surgery and other organs possible. Artificial kidneys and temporary artificial hearts are available.

Cardiac surgery: The heart-lung machine made it possible to stop and restart the heart during various cardiac surgeries.

Small fibre-optic instruments called endoscopes have led to the new field of minimally invasive ‘key hole’ surgery. A diseased gallbladder or appendix can be removed through small slits rather than large incisions, greatly lessening recovery time.

Dr Nishit J Shah, honorary ENT Surgeon, Bombay Hospital explains,“Nasal endoscopy has changed our understanding of sinus physiology and allowed us to change our concepts of surgery to revolutionise the results. The advantages of endoscopic surgery include clear visualisation, better exposure, cosmetic – as there is no external incision or scar and complete clearance of disease. Apart from sinus disease, base skull and brain surgery (like pituitary adenomas) can be performed endoscopically through the nose, which with its relative ease and decreased complications is fast replacing trans-cranial surgery done through large incisions on the head.”

Endoscopic surgery per se reduces the amount of anaesthesia required during the surgery, reduces morbidity and hospital stay. It also reduces the requirement of transfusing of blood and blood products.

Robotics: “The advent of robotics began with the computer era. It entails the computer-assisted movement of artificial arms. Either voice-controlled or hand remote-controlled manipulation is used. Robotic surgery allows the surgeon to operate without putting his hand into the surgical field. It allows precision surgery, requires smaller incisions and allows distance surgery from another room, city, country or even another continent,”explains Dr D S Saksena, eminent cardiothoracic surgeon. It has found application in cardiac, neuro and variety of other surgical specialties. In 2001, surgeons around the world have performed new abdominal procedures aided by robotic systems.

Telemedicine: Advances in computer and Internet technologies have created new possibilities. In telemedicine, a computer fitted with special software and a video camera turns a live video image of a patient into a digital signal, which is transmitted over high-speed telephone lines to similar equipment at the doctor’s office. Here it is converted back into a format that can be viewed live on a television screen. Also, specially designed machines measure and record a patient’s vital signs at home, then transmit the information directly to a hospital nursing station.This electronic remote home care enables health care professionals to monitor a patient’s heart rate, temperature, blood pressure, pulse, blood-oxygen levels, and weight several times a day, without the patient ever having to leave home.
Dr D B Modi, says,“Computerisation in radiology in the form of digital X rays, which can be captured on a computer chip and the digitalised image can be viewed interdepartmentally, inter hospital and sent for PACs (Picture activity communicating system).”

It provides a vehicle for doctors and patients in remote locations to interact while also enabling doctors in distant locations to share information. Patient charts, X-rays, and other diagnostic materials can be transmitted between doctors’ offices and doctors in rural areas of the world can observe state-of-theart medical procedures.

The long and short of penile implants

Erectile Dysfunction – What You Should Know About It?