Abstract  Priapism can be successfully treated by unilateral or bilateral percutaneous transcatheter occlusion of the internal pudendal arteries. Occlusion should be reversible in order to avoid impotence. Embolization with autologous clot satisfies this requirement because of the clot lysis and consequent vessel recenalreation. Three cases are extensively described which demonstrate the feasibility of the method and the ability to preserve sexual potency. The rationale for using interventional angiography in priapism is also discussed.

Priapism is defined as prolonged painful erection which can lead, if not cured, to fibrosis of the corpora cavernosa and impotence. The basic physiopathologic mechanism of priapism is still unclear. A venous outflow obstruction caused by the closure of the potatoes of the efferent veins, venules, and arteriovenous connections has been claimed traditionally as the initial factor. Subsequently, the viscosity of the blood rises because of the increased carbon dioxide tension; edema of the trabeculae occurs, thus increasing the vascular stasis. Another hypothesis suggests that priapism could result from sustained abnormal parasympathic stimulation with consequent increased arterial blood flow. The arterial overflow would maintain the engorgement of the corpora cevernosa regardless of the venous outflow channels. Whatever the mechanism, it seems clear that priapism occurs when the arterial inflow exceeds the venous outflow. A relative excess of arterial blood flow always exists in priapism. Wear and associates in 1976 first introduced a new approach to treatment of priapism based on temporary reduction of arterial inflow. They performed selective permotaneous embolreation of the internal pudendal artery and achieved early detumescence in a case of idiopathic priapism. We describe here our experience with this technique, based on 3 cases of suecessful treatment of priapism by unilateral or bilateral temporary embolreation of internal pudendal ancries with autologous clot.

Case1 a 74-year-old man was seen for priapism which had been pres-ent for 48 hours. No hematological, systemic, traumatic, or neoplastie etiology mold be demonstrated. With the patient under spinal anesthesia, aspiration and irrigation of the corpora cavernosa were done. Only a partial resolution of the priapism was achieved and penile erection recurred 30 minutes postoperatively. 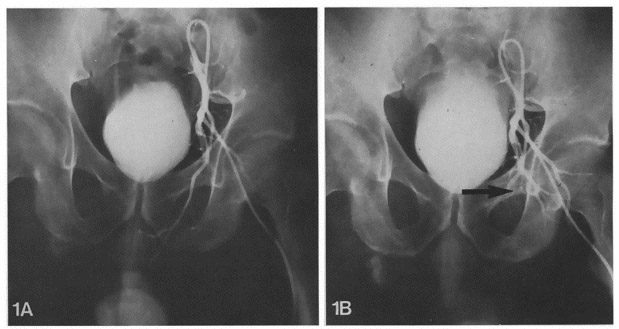 An angiographic study was performed and the left internal pudendal artery was catherterized selectively. Its size was within the normal range but was increased compared to the contra lateral artery. Occlusion of the left internal pudendal artery was done to reduce temporarily the arterial blood supply, the dining the discrepancy between inflow and outflow. Autologous clots (10 ml) were prepared and minutely fragmented. Injection of 2 ml of clots resulted in complete occlusion of the internal pudendal artery.  Soon after embolization, aspiration and irrigation of corpora cavernosa were repeated. The penis became flaccid rapidly and the irrigating liquid progressively cleared. No early complication of pudendal emboliation to occurred. The patient did not experience any pair. The penis remained flaccid and the patient was discharged from the hospital a 4 days after embolization. 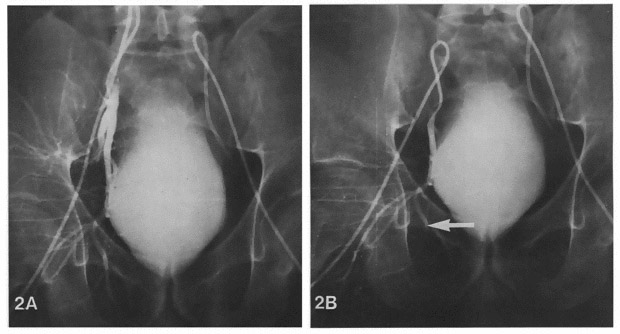 This patient has hem evaluated for 4 months with no recurrence of priapism. He has experienced morning erection without attempting sexual  intercourse; he reported that his normal sexual life had been interrupted for several years. He refused a control angiography study. The features of this case have been published elsewhere.

Abstract  Priapism can be successfully treated by unilateral or bilateral percutaneous transcatheter occlusion of the internal pudendal arteries. Occlusion should…