Why do men cheat? Why do women cheat? Are the reasons different? Or are they the same?

These are the questions explored today on CNN Health by sex therapist, Ian Kerner in his latest column entitled Female infidelity: It’s different from the guys

The answers in Kerner’s article parallel many of the findings from my in-depth infidelity research which started over 17 years ago, and still continues today.

Why Men and Women Cheat

As an infidelity expert frequently called on by the media to comment on popular infidelity issues in the news, one of the most frequent questions I get is this:

What makes a man or woman cheat on his or her mate?

The answer to that question depends on whether the cheater is a woman or a man.

Numerous infidelity studies, surveys and polls have found that the reasons why men cheat differ from the reasons why women cheat. Each gender has different motivations for getting involved in an affair.

Sexual vs Emotional Reasons for Cheating on One’s Mate

Below are the top 10 reasons cheating husbands and cheating wives use to justify their extramarital affairs.

You will notice, when you compare the two lists, that for cheating men, sex is the primary motivating factor.

For cheating women, the key factors are dissatisfaction, unhappiness, or unmet emotional needs.

In his article, Kerner states:

“It’s often said that men cheat for sex, while women cheat for love, the theory being that men can more easily compartmentalize sex and emotion, while women typically need to experience an emotional connection to a person before feeling sexual desire.”

See Also : Will she cheat on you? – If she fits into one of these categories, she might

Differences in the Reasons Why Men and Women Cheat

Men tend to cheat largely for sexual reasons, while women cheat for emotional reasons. There are several infidelity studies that bear that out.

One study, in particular, found that 75% to 80% of the men who admitted to having extramarital affairs said that sex was the primary reason. See Why Husbands Cheat and 25 Reasons Why Men Cheat and Is He Cheating on You? – 6 Articles to Help You Understand His Infidelity

Yet, only 20% of the women who were having extramarital affairs said they cheated on their spouses for purely sexual reasons. See Will She Cheat on You?, 14 Kinds Of Women Most Likely To Cheat On Their Mate and Study on Mothers Who Cheat,

More about Why Men Cheat

As you can see, unhappiness or dissatisfaction is not a major reason why men cheat, but it’s one of the primary motivating factors for women who cheat on their mates. See Is He Cheating on You? – 6 Articles to Help You Understand His Infidelity 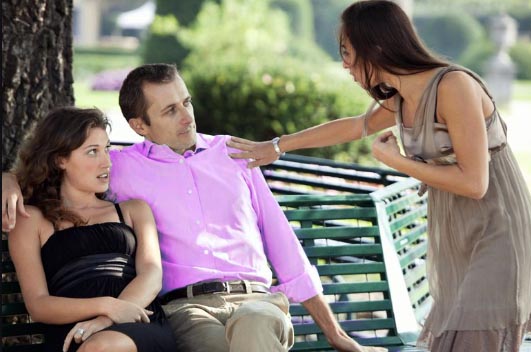 Many people believe that a happy husband will not cheat on his wife, and that a good marriage or relationship is immune to infidelity. My ongoing independent research, as well as recent infidelity studies prove that this is not true. See Happy Husbands Cheat Too, and Even Good Marriages are Susceptible to Infidelity

Kerner concurs, stating in his article:

“Many of the men I’ve encountered who have cheated on their wives often have no desire to leave their primary relationship. Many of them even characterize themselves as happily married with satisfying sex lives.” See Is He Cheating on You? – 6 Articles to Help You Understand His Infidelity

More about Why Women Cheat

As I have stated in numerous TV interviews, in many of my articles, and in the CBC (Canadian Broadcasting Company) documentary on female infidelity entitled A Passion for More, women tend to cheat as a last resort.

A woman will usually attempt to convey her dissatisfaction or unhappiness to her mate. If he ignores her or takes her complaints lightly, and it becomes clear to her that nothing will change, she will usually have an affair.

Kerner confirms this in his CNN article, in which he writes:

“A woman who cheats is often a woman who doesn’t want to work it out.She’s already invested time trying to work it out, and she’s done. It’s too late.” See Is She Cheating? Most Husbands and Boyfriends Find Out Too Late

Unfortunately, as widespread as female infidelity has become, many unsuspecting men have no idea their wives or girlfriends are having an affair.

The Infidelity Victim is the Last to Know

Regardless of the reasons why men and women cheat, one thing holds true across the board: The victim of infidelity is still the last to know – despite the presence of many subtle and obvious telltale signs. See 17 Subtle Signs That Your Marriage or Relationship is About to End and 40 Fatal Signs That You’re about to Be Dumped.

Another study found that 60% of the cheating spouses said their partner was unaware of their affair.

The iVillage / MSNBC Lust, Love and Loyalty survey found that less than 30% of cheaters get caught.

The best strategy for anyone who hopes to save a marriage or relationship from infidelity is to educate oneself about infidelity, and learn to recognize both the subtle, and the obvious signs.

In this day and age, anyone who has the misfortune to be a victim of infidelity, cannot afford to be the last to know.

7 Reasons your marriage is doomed for failure