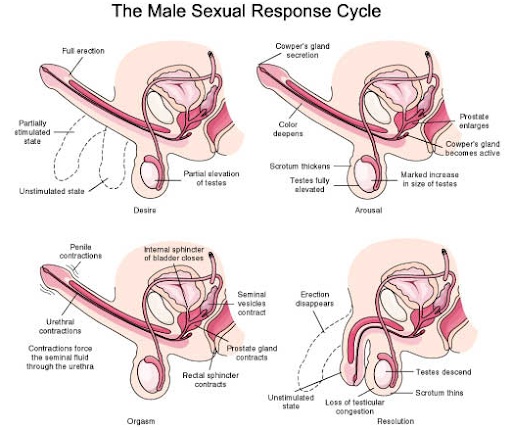 What is Sexual Response Cycle?

The sexual response cycle is made up of four phases that describe the emotional and physical alteration that takes place in the body when a man or a woman is sexually aroused. The cycle includes the changes that take place when one is involved in activities that stimulate one sexually and this includes masturbation and intercourse. The sexual response cycle is made up of four phases and this includes excitement, plateau, orgasm and resolution. Bothe genders have these phases when they are sexually stimulated but the only difference is the timing. For example, it is not usual that both partners will reach orgasm at the same time. The time that is spent in each phase and the intensity of each phase will also vary from one person to another. It is important for partners to understand the differences in their bodies and response in their partners as will help them to become more intimate.

What are the Various Phases of the Sexual Response Cycle?

This phase can last from very few minutes to several hours. The changes that occur in the body will include increased muscle tension, increased breathing and heart rate, flushing of the skin, increased blood flow to the genitals. This causes the swelling of the inner lips of the vagina and the clitoris and the penis is enlarged resulting in an erection. The vaginal walls start to swell and there is increased lubrication of the vagina. The testicles of the man start to swell and there is tightening of the scrotum. The man starts to secrete a liquid that helps with lubrication. The breasts of the woman become fuller and nipples become erect.

This phase usually extends to the next phase where one has orgasm. This phase involves the intensification of the changes that occur in phase one. The vaginal walls continue to swell and change their color to become dark purple. This is because there is increased blood flow to the vagina. The clitoris become highly sensitive and some people may have pain when it is touched. There is retraction of the clitoral hood and this helps to avoid being stimulated directly by the penis. The testicles of the man are withdrawn upwards into the scrotum and there is also increased muscle tension. The heart rate, blood pressure and breathing are increased. One can have muscle spasm in the face, hands and the feet.

This phase marks the climax of the sexual activity and it is usually the shortest phase lasting for a few seconds. The changes that occur in the body include involuntary contractions of the muscles. There is spasm of the muscles that are located in the feet and there is a forceful and sudden release of the sexual tension. There is increased heart rate, breathing rate and the blood pressure also increases. The muscles of the vagina contract and the uterus get rhythmic contractions. There are rhythmic contractions of the muscles that are located at the base part of the penis and these results in ejaculation. There is a rash called sex flush that is likely to appear in the whole body.

This is where the body returns to the original state where the normal level of functioning is restored. The erect and swelled body parts return to their original state in color and size. This phase is marked by increased intimacy and fatigue. Women are capable of returning to the orgasm phase when they are further stimulated sexually and this may cause them to have multiple orgasms. Men need to recover after the orgasmic period is over and this is called the refractory period. This is the period in which the man is not able to reach orgasm and the duration of this period is increased with advanced age.

The sexual response in male is made up of four stages as above. The excitement phase is triggered by touch, images, scent and external stimuli. The man becomes sexually aroused and the penis increase in size. These factors can be influenced by anxiety, depression, stress and distraction. Plateau phase is an intensified phase of excitement. The man will have an increase of blood to the penis and the testes. The next stage is orgasm and ejaculation that marks the climax of the sexual response stages. This is where the man ejaculates semen and may also have rhythmic contractions in the penis. Resolution stage is where the man returns to the normal state where the blood flow to the penis is reduced and erection subsides. 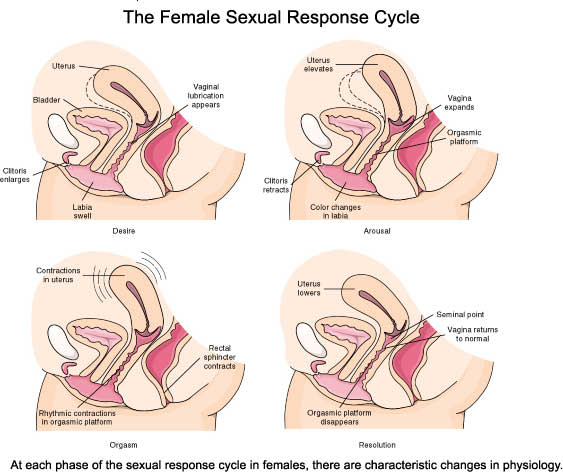 The sexual response cycle is made up of four phases in both male and female. This includes the excitement, plateau, orgasm and resolution phases. This phases show the changes that occur in the body when one is sexually aroused, the climax and when the body returns to its original state. The phases are the same in both genders but the only difference is the timing.

How To Have A Female Orgasm