Are there sex positions that couples can use to keep from getting pregnant? A sex therapist explains the right – and wrong – ways to go about pregnancy prevention.

There are a lot of myths out there about sex, pregnancy and birth control, and when people accept them as medical fact, they are usually in for a big surprise. A reader named Max, from Dayton, OH, has just such a misconception, as we can see in the following message: 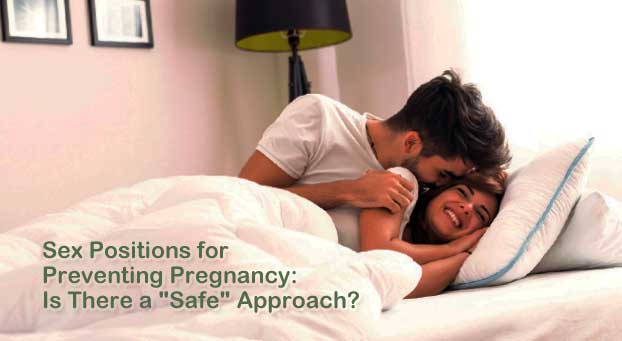 My buddy told me that I can’t get my girlfriend pregnant if we have sex standing up. What other positions are safe?

I just want to make that clear. When a man ejaculates, he releases about a teaspoon of semen, which contains roughly 200-300 million sperm cells – that’s a lot — and it only takes one of those little guys to get a woman pregnant. Now, most people don’t know this, but you can actually get pregnant without even having penetrative sex. If a man’s penis is rubbed against a woman’s vagina, or if ejaculate is spilled near the vaginal opening, semen can actually find its way in and get a woman pregnant.

Additionally, pregnancy can occur even if a man doesn’t actually ejaculate. When a man gets aroused, he releases tiny drops of semen – which you might know as pre-cum – and that little drop is all it takes to get a person pregnant if the woman’s egg is ready and waiting. So, you can never be too safe. When you’re trying to avoid pregnancy, the only surefire way to stay safe is a position in which all your clothes remain on. That’s right, abstinence is the only 100% guarantee to avoid pregnancy.

That being said, condoms do a pretty good job as well. They are about 99.9% effective IF they are used properly, but there is still that very small risk, so you need to be aware of that going in.

Low sex drive and the pill: When hormonal birth control leads to a sexual slump

Problems related to hormonal birth control come up often in my practice. One common complaint is the effect it may have on a woman’s sex drive. For example, a client whom we will call Ashley, from Chicago, IL, asked recently:

“Can the Pill lower your sex drive? I recently switched my prescription, and things have felt a little bit off in the bedroom ever since.”

The answer here is that, yes, in some women, hormonal birth control can absolutely decrease their sex drive and desire; but with others, it may have absolutely no impact whatsoever. This is simply related to the differences in how our bodies respond to certain hormones. Now, if Ashley had no other changes except for the addition of the pill, and that’s right about the time that she noticed this drop in her sex drive, there’s a pretty good chance that’s the culprit. In that case, I would suggest that a woman like Ashley talk to her doctor. She can likely prescribe a low-dose hormone pill that might speed things up in the bedroom and make her feel back to normal.

If, however, a slump like this has been going on for a long time, and maybe the hormones are just aggravating it, it could be a sign that there is an emotional or relationship issue at play, in which case a therapist may be the perfect person to talk to. She might be able to help sort out any issues and figure out what is at the root cause of the low sex drive. Alternatively, women can start by talking to their partners about this problem; they may also have some insight into what the problem is, and they may even be experiencing the same slump. Working together can help couples to brainstorm and figure out how to add some spice back into the bedroom.

How To Make Love To A Woman – And Give Her The Maximum Sexual Satisfaction Ever!

How to Improve Sexual Performance?