“The Five Sex Positions Women Enjoy Most”. Using my completely, totally unscientific research methods*, I have compiled a list of the Five sex positions women enjoy most. Each will explain the mechanics of the position, interesting facts, what makes this position enjoyable and tips for making it more enjoyable for both of you. Whenever possible, quotes from my research subjects will be sprinkled throughout. Be sure to read the companion series, “The Five sex positions men enjoy most”. 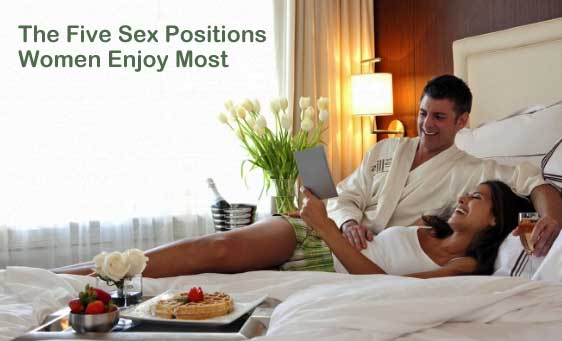 The mechanics. In the 69 position one partner lays on their back while the other straddles in the opposite direction, placing face to genitals in both cases. This position can also achieved with both partners on their sides. While penile penetration cannot be achieved from this position, both partners can enjoy in a variety of oral and manual stimulation. One reader from Franklin stated, “I love 69 because it is the ultimate equalizer-whatever I can do to him, he can do to me”.

Interesting facts. Participants of 69 resemble the numbers 6 and 9, hence the name “69”. They also resemble the Yin and Yang symblos. The French term for this position is “soixante-neuf”.

What makes this position enjoyable. The act of giving and receiving at the same time is a major selling point of this position. Traditionally, the woman is on top for this position. A lot of women find it very gratifying having her genitals completely exposed to her partner. “Nothing is hotter than knowing he has my p*ssy spread open and exploring it with his tongue, lips and fingers” said another reader.

How to make 69 more enjoyable. Discuss ahead of time where ejaculate is to go. There is no bigger turn off to a woman than an unexpected-and unwelcomed-surprise. To avoid kinked necks, you may want to a couple of pillows handy in case either of you needs a little added support. You can also roll onto your sides and use each others’s thighs as support.

The mechanics. In the Kama Sutra, 69 position one partner lays on their back while the other straddles in the opposite direction, placing face to genitals in both cases. This position can also achieved with both partners on their sides. While penile penetration cannot be achieved from this position, both partners can enjoy in a variety of oral and manual stimulation.

Interesting facts. In the Kama Sutra, 69 is called “Congress of the Crow”. Pornographic movies would have you believe that 69 is taking place in every bedroom in America, however, that is not the case. A reader from Yellow Springs told me, “As much as I enjoy giving and receiving during 69, it is just too darn distracting! I am worried that in the heat of the moment I may lose control and accidentally bite her.”

What makes this position enjoyable. The act of giving and receiving at the same time is a major selling point of this position. Traditionally, the woman is on top for this position as she is usually the lighter partner. A reader from Centerville told me this position scores high because it is “Literally up front and in your face. There is nothing hotter than having her package right in your face where you can see, touch, taste and smell every inch of her”.

The mechanics. The belly down position has the woman lying on her stomach with her partner penetrating her from behind. She raises her hips slightly. This position is essentially doggy style flattened out.

Interesting facts. If you are interested in attempting a g-spot orgasm, this position is the ideal one to try. The head of the penis will directly stimulate the woman’s g-spot. “I never thought I could get off just from intercourse until I tried this. Now it sets me off every time!” exclaimed one interviewee.

What makes this position enjoyable. This position will create a very snug fit, giving both partners more intense pleasure.

How to make the belly down position more enjoyable. Most men don’t realize just how sensitive a woman’s back can be. Be sure to pay extra special attention to the bare skin stretched out before you. “There is something about being so thoroughly dominated that sets my skin on fire” explained another reader.

Interesting facts. It was once believed that humans were the only animals to have sexual intercourse in this position, but studies have also shown that bonobos and gorillas also engage in face to face (MSNBC). Religious figures viewed the missionary position as civilized and other position “bestial”, since those were the positions animals copulated in. Some believed it was the only position that could be used to conceive a child while others thought that “unnatural” positions would create birth defects. If you are trying to conceive, some believe missionary position may be a better position to participate in as the man can penetrate deeply and ejaculate right at the mouth of the cervix (Getting Pregnant Tips).

What makes this position enjoyable. What may seem like a plain position can easily be manipulated into a wide variety of new ones. Props, such as pillows, can add to the variety. As one reader from Miamisburg  put it “I like this position because my partner can move her legs into different positions and change how the position feels”. This is also a popular position for men who like to control their lovemaking sessions. “I like missionary because I can control the speed and the rhythm ” chimed in reader from Mason. A third reason why missionary position is popular is the access it allows a man to his partner’s most intimate places. A man can view or touch a woman’s clitoris and breasts.  A third reader from Centerville stated “I like missionary because I can see all of her yummy parts”.  The missionary position also allows for an amazing amount of skin to skin contact which is a huge turn on for most men.

How to make Missionary more enjoyable.

The mechanics. In the lotus position, the man sits cross legged while his partner straddles him. She wraps her legs around his body. Both partners are intertwined and gently rock back and forth.

Intersting facts. This sexual position is derived from the yoga pose of the same name.

What makes this position enjoyable. This position is a pleaser for the closeness it brings.It allows for easy kissing, fondling of the breasts and clitoris. “Wow! Can two people get any closer than this position?” asked/exclaimed one respondent from Springboro.

How to make the lotus position more enjoyable. This position requires some flexibility from both partners, so it is highly recommended you both stretch before trying the lotus position. If possible, take a beginner’s yoga class together. Be sure to take full advantage of the closeness the lotus position brings to sex. Touch, fondle and kiss to your heart’s delight!