Standardization of the procedure of extracorporeal shock-wave therapy (ESWT) is currently baking. Although some positive results in terms of improvement of penile pain. penile curvature, and overall subjective symptoms have been reported. evidence-based data are lacking. ESWT seems to be well tolerated. but longer follow-up is needed to exclude possible long-term side effects. There is no clear explanation of the mechanism of action of ESWT in patients with Peyronie’s disease.

Peyronie’s disease is an acquired condition characterized by formation of fibrous plaques within the tun’ca albuginea of the corpora cavernosa of the penis. These plaques can lead to penile deformities during erection, such as curvature, shortening, or hour-glass shape, which might be associated with painful erections and a variable degree of erectile dysfunction (ED). In the most severe cases, penile bending induced by the fibrous tissue can pre-vent vaginal penetration. Because Peyronie’s disease has been considered a rare condition with unclear natural history, epidemiologic data are inconsistent. Lindsay at al . reported a prevalence of 388.6 cases of Peyronie’s disease per 100,000 male patients in a 35-year retrospective study conducted in Rochester, Minnesota. The highest prevalence in this study was reported for the 50- to 59-year-old subgroup. However, reported epidemiologic data seem to underdiagnose the real prevalence of this disease, as indicated by biopsy studies. Although many aspects of pathophysiology, diagnosis, and medical and surgical treatment of Peyronie’s disease still remain under debate,

Recent interesting advances have been made, and the interest among investigators remains high. With regard to management, topical and systemic medical therapies have been associated with controversial results. Several surgical procedures have been developed recently, although the ideal surgical procedure, especially in the case of severe and complex curvature, has not been clearly identified. Extracorporeal shockwave therapy (ESWT) is a noninvasive and conservative treatment that was first reported in 1998. as an effective first-line therapy for Peyronie’s disease. Since then, several authors have reported their clinical experiences regarding the role of ESWT in the treatment of this medical condition, with mostly controversial results because of the lack of standardization of indications for treatment and treatment protocols. Although the rationale for this treatment is not yet known, many possible mechanisms have been suggested. These include direct damage to plaques induced by shock waves themselves, creating a local inflammatory response (involving changes in the free-radical milieu and in macrophage and neutrephil activity), leading to progressive plaque lysis. Further-more, this inflammatory reaction after ESWT might indirectly affect plaque configuration through an improved vauularity with plaque reabsorption. This could lead to a progressive change in the molecular and structural characteristics of the plaque, inducing a progressive remodeling and reabsorption of the plaque itself. Furthermore, a destruction of pain receptors induced by the direct action of the shock waves has been suggested. These hypotheses have been supported by a few studies .  regarding the use of ESWT on soft tissues. The use of extracorporeal shock waves on pigskin seems to stimulate a process of wound healing by unknown mechanisms, although no histologic changes have been noted when penile tissue subjected to shock waves has been analyzed. Furthermore, it has been hypothesized that repeated penile trauma induced by topical application of extracorporeal shock waves to plaques could induce a contralateral warring and deformity, which could be associated with a shortening of the contralateral side of the penis, resulting in a ‘false’ straightening of the penis. Although many abstracts have reported the clinical benefits of ESWT in the treatment of Peyronie’s disease, only a limited number of papers have been published in the peer-reviewed literature. 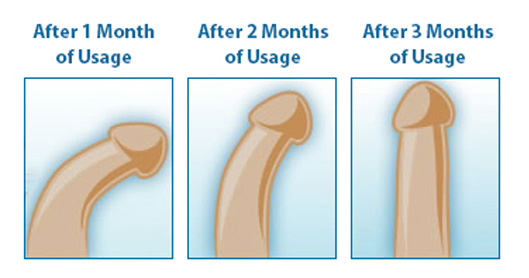 This review is aimed at analyzing the efficacy, tolerability, safety, and reliability of ESWT as a first-line, noninvasive treatment for Peyronie’s disease. In the evaluation of the source information, we followed the guidelines recently pro-posed by Mulhall . to decipher clinical trials in the most appropriate way. The following aspects were assessed: trial design, patient population, and endpoints used, including patient-satisfaction profiles and advent events.

Must of the clinical trials using ESWT for the treatment of Peyronie’s disease consist of prospective, noncontrolled studies. published the preliminary results of a case-controlled approach, consisting of a prospectively designed trial that included 22 patients affected by Pcyro nie’s disease who were treated with ESWT after unsuccessful oral drug therapy compared with 23 age-matched patients who had not received previous therapy but had received daily oral placebo for 6 months as a control group. The scientific significance of this case-controlled study was limited by the number of patients included who refused to serve as controls without treatment. Therefore, the same authors used a prospective design with a different technical approach. reported a three-amt, non-controlled, retrospective study, subdividing patients enrolled into three treatment groups: shock waves alone; combination of both shock waves and perilesional injection of verapamil; and injections of verapamil alone. The authors considered the patients treated by verapamil injections alone to be the control group. In all studies reponed in the literature, patients were assessed before and after shockwave administration in terms of the severity of penile curvature. pain during erection. and quality of erectile function. Unfortunately, standardized questionnaires were never used. Several authors  used a pretreatment ultrasonography to assess plaque features, and, in some studies, the pre-treatment  and/or post-treatment penile curvature was reported only by means of patient interview results or photographs taken by the patient. The accuracy of this method in measuring the real penile curvature is highly dependent on a full erection not always reached with a nonassisted penile injection. As pointed out by, the evaluation of the therapeutic effect induced by ESWTon penile curvature depends strictly on the technique of objective assessment, and it has been suggested that an artificial erection seems to be the best meshed to evaluate the post-treatment penile curvature. The adverse events profile of this approach has been investigated by means of questions regarding presence of urethral bleeding, penile hematoma and petechiae, penile pain, and dysuria.

Various lithotriptors and schemes of extra-wave application have been used, although their clinical significance in reducing penile symptoms and plaque size are still under debate. Some groups used the Store, whereas others used the Siemens Multiline (Siemens Medical Solutions, Erlangen, Germany). The Wolf Piezolith, the Dornier EPOS ULTRA devices, and the EDAP (Techno Medical Systems, Vaulx en Veline, France), with a special device to fix and localize the plaque, have also been reported. A general agreement regarding the dose of shock wave energy to be used has not been reached yet. The most used dose of shock waves has been 3000, with a range of 1000 to 4000 and an emission frequency of generally 120 shocks/min per session. This dose application has been repeated generally for three sessions (range, 1-10) and was eventually readministered in additional sessions if any modification in penile plaque and/or subjective symptoms were recorded. Recently, a direct comparison of clinical effects of ESWT on penile symptoms was performed based on different degree of energy used in 10 different sessions: patients were randomized to receive high (energy density 0.6 ml/mm’). medium (0.28 mff mm’), or low energy (0.08 mff mm2) shock waves. Used a randomization regarding the timing of sessions distribution to eventually record any clinical differences between two groups of patients who were randomly divided into two different energy application schedules: three sessions of ESWT at 4-week intervals and three sessions on consecutive days. Based on the various trial designs developed for ESWT, the absence of a standard protocol regarding patient selection, modalities of shockwave application, and pre- and post-treatment patient evaluation contributes to making this kind of treatment for Penonie’s disease investigational and not actually fully applicable in everyday clinical practice.

Patient Populations Patient selection varied significantly among the studies performed, causing a major difficulty in comparing results obtained. In many studies, symptomatic patients (eg, patients with penile curvature and/or pain during erection), regardless of the presence or absence of palpable plaques and possible previous treatments, were treated with ESWT. Often, there was no mention of previously administered oral drug therapy, with the exception of the study by Hauck, who reported the previous unsuccessful treatment with potassium p-aminobenzoate and vitamin E in patients treated with ESWT In other studies, only patients who had previously failed to respond to oral chug therapy received ESWT leading to a selection of patients with more severe penile deformities and with a more stable disease.

Get More Information on Shockwave Therapy in India , Penile Implant and Peyronie’s Disease Treatment at:

Standardization of the procedure of extracorporeal shock-wave therapy (ESWT) is currently baking. Although some positive results in terms of improvement…